Why do Microphone tubes cost so much?

Sometimes people wonder, when they send vintage mics in for repair, or even new production out of warranty, why tubes can cost so much. Sadly, the days of $1 tubes are over for most of us. And there is no new manufacture of useable mic tubes. Fortunately, there are still tubes available. But they must be tested, burned in, then tested again. That's after they are found. In short, there is generally a high rejection ratio for microphone tubes, due to the high impedance involved, and the sensitivity to amplify even the slightest imperfection of vacuum or molecule of gas. I've even had known, reliable preamp and guitar tube tester guys send me tubes that were "super quiet" for guitar amp or hi-fi preamp use, that were unacceptable for pro mic use. See the above photo for last year's bad tube collection, the middle yellow bin being the most expensive: the EF86 for use in U67's. With a high rejection ratio, and an average price over $25 (off the top of my head) you're looking at one expensive tube. Of course, rejection levels vary with production lot, but even then, it's no guarantee. And then there's all that labor that goes into the selection process, including the rigs you'll have to build yourself.
As an example, we recently replaced a submini tube (which can be found untested for under $100ea) in a Neumann M147, which cost  over $300. Cheaper for us to buy from Neumann USA than for us to find 30, 100 or 1000 pc and the test test them, especially since they are wire leads and not pins, therefore requiring Greater labor just to test.
Note to the wiseass who wants to comment on their "long streak of dumb luck" in finding what they call acceptably quiet mic tubes, please don't bother, I can probably prove your tubes are noisy.

Posted by David Bock at 5:16 PM No comments:

cheap link to another blog

This week's blog is a cheap link to another blog:
http://mikesundertoneaudioadventures.blogspot.com/2012/02/rock-roll-keeps-on-going.html
It matters because it talks about the new Slash record, which, besides using a new Bock mic (not yet released to the general public), it emphasizes a real back to basics approach to making a rock record, which I endorse 100%. It's a band in a room, with chemistry, who edit by playing the song (yes you jazz guys & gals are already bored) together. That's a big deal these days, and we look forward to the final product. Eric and the band took their time to find the perfect matches of mics to instruments in a bleed-heavy environment, and kept the number of mics to  a minimum. Remember, these guys have the resources to pick ANYTHING THEY WANT, vintage, new, obscure & common. Eric played me the track you see Slash playing in the photo (nylon string, the softer side of Slash) and it is superb. The recording has all of the body you would feel if you were playing the guitar yourself, and all of the articulation you would hear if you were in front of the instrument.
More on that mic at a later date, now, time to complete preparations for our little show in NYC this Saturday, here is a link to the event:
http://audioundergroundroadshow.com/
If you are in NYC please register and I would love to meet and talk with you.
Posted by David Bock at 11:47 AM 1 comment:

This year's Grammy awards finally got me off my duff and onto the page, and I am starting my long threatened microphone blog. Sounds obscure, but once you start focusing on microphones in society, there's no turning back.
The point today is this: Dave Grohl made an awesome speech at the Grammies after he and his band Foo Fighters won their award. He talked about the essence of recording, as opposed to common production fluff. And he specifically mentions microphones. But here's the rest of the story he didn't have time to tell:
I met Dave and his wife by chance at a local LA restaurant just a few years ago. This two Michelin star restaurant is NOT where you go to be seen (as many Hollywood places are) or bring your Entourage, you go for the excellence and creativity of food and service. As we talked, he discovered that I had recorded one of his favorite San Francisco punk bands, Bomb (who I always thought was a prequel to Nirvana) and I discovered this: Dave, who had had the opportunity to use any kind of vintage mic he wanted, loved the Bock 251 because it made him work to perfect his singing, because, for the first time, he could fully hear himself. (what mic makes a singer feel they can finally hear themselves varies greatly with singer, experience, & phases of the moon) Wait, is that a backhanded compliment? No. Here's a punk who grew up and still loved music so much that he'd rather work at it than coast on it or phone it in. Besides, who insults something they spent five grand on?
So there's the little story behind the story, he and the band really do work at it. It was a pleasure to meet him and we at Bock Audio are proud to have helped Dave and Foo Fighters, and Butch Vig with their quest. 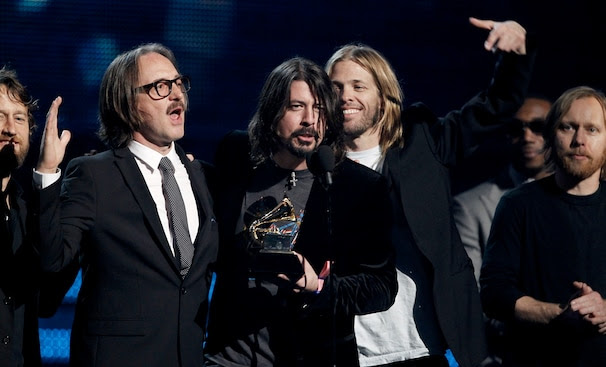 Posted by David Bock at 5:41 PM No comments: